I greeted Max as he got off the bus and felt this strong feeling that I needed to ask him how his day went. I do ask him, but sometimes not until we are seated around the dinner table. Max stopped on the walkway that leads to our  front door, dropped his back pack, lunch sack, and viola minutes after I asked him. Tears escaped from his sky blue eyes and cascaded down his cheeks.  "Dale said to stop talking to him on the bus and Karl told me to stop asking the same questions in class today."
Max took a deep breath and wiped his eyes. "I don't have any friends."

I called his teacher and she said that Max and the other students seem to all have a problem with asking the same questions over and over.  She told me he has lots of friends. I guess it's a trial we all experience in our life, where we feel like we don't matter and no one wants to be our friend.

I broke into a million pieces hearing Max say I don't have any friends. Its a sentence I hoped would never cross his lips. I remember when my oldest son felt like he didn't have any friends because he was smart. I remember him  saying, "I wish I wasn't smart." I guess all of us go through a period in our life where we feel like we don't matter to our peers. Even Max with autism has to learn to cope with the same stuff a typical child deals with. I am glad Max recognized what a friend is and that he wants friends.

One question Max has been asking me since the election is. "Mom are we going to have a civil war?"  Max always follows up with reason before I can answer him, with
"I think we will have a civil war, because people don't know how to be nice to each other." 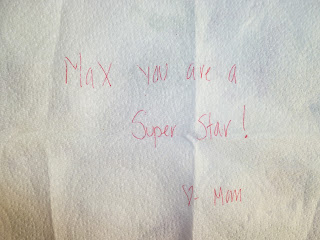 I always write a note on Max's paper towel that I put his his lunch box.